I’m supposed to be knitting a poncho, but even after much looking around, I didn’t find any pattern that I felt suited the two colors that I want to use for this project. Nor was I in the headspace where I could design one by myself. So of course, I ditched this project for the time being, and thought I’d learn a new technique – argyle patterns through planned color pooling.

The argyle creation concept is simple, really. You need a self-striping yarn with a color sequence that repeats consistently, and you ensure that you make your stitches such that the color sequence shifts by exactly one stitch in every other row. That is, you plan your color pooling. And voila! You have your argyle pattern. And since I’m sure that this summary wasn’t very clear, maybe you could peruse a bunch of Interweave articles on color pooling instead.

I had just the consistently self-striping yarn to try out planned pooling – bought more than a decade ago and used in a cabled hat. (As you can imagine, the cables don’t really show amidst the colors. What can I say, I wasn’t very knowledgeable then…) Anyway, the argyle pattern created by the yarn looked good on paper – I created a color chart and everything – but it’s not really very evident in the actual fabric.

However, I still like the pattern, so I used it to make a cosmetic bag, which will accompany me to work. I have some lovely blue leftover yarn that I thought would look great as a border. I initially thought I’d make the bag cylindrical, and crocheted two circular discs. They ended up as tiny hats because I’ve obviously forgotten how to make discs. But then I didn’t like the cylinder concept, so I frogged the circles. I made the bag flat instead, by folding the argyle fabric, joining the sides with a narrow layer of single crochet rows, and then adding reverse single crochet borders to reinforce the edges.

To finish the bag, I chose neon orange buttons and applied some art wax on them for a fun look, stitched them on, and then simply looped the yarn for some oblique loops. If the loops don’t last, I’ll probably replace them with crocheted chains or knitted i-cords.

The bag is perfect for storing minimal cosmetics for touch ups, and I love it! 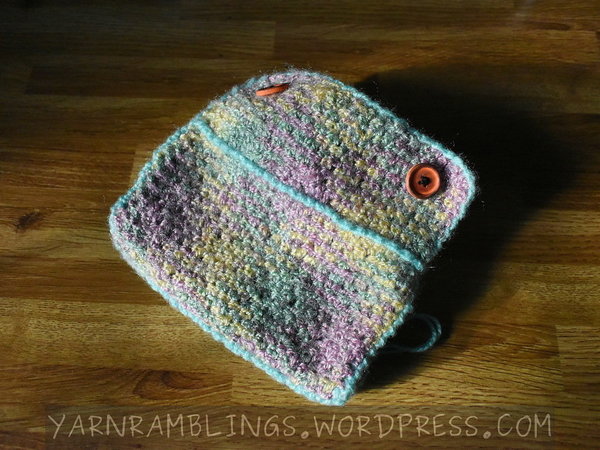 As for the argyle technique, though it is a simple concept, it requires concentration and definitely some frogging too – yarn color lengths are not really that consistent, or your stitch tension might change, so you’ll need to frog and re-stitch a bit tighter / looser to maintain the same length for the color sequence, or maybe even use half-double crochet at places instead of single crochet. So I found it a good project to keep myself occupied. I’ll definitely want to use it again sometime.

Do argyle patterns appeal to you? Think you”ll try out planned pooling?